Blog - Latest News
You are here: Home / Mgr. Arguelles on his talk with Cardinal Joseph Ratzinger 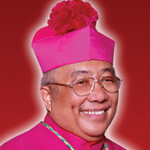 From January 1994 until September 1995, I was the auxiliary bishop of His Eminence Jaime Cardinal Sin, Archbishop of Manila. From September 30, 1995, I was the Bishop of the Armed Forces of the Philippines I until I became Lipa Archbishop in May 2004. That is when I met my fellow Military Ordinary, Bishop Josef Maria Punt and got to know about Our Lady of All Nations. At the same time that I was bishop of the Armed Forces of the Philippines, I served within the Catholic Bishops Conference of the Philippines as Chairman of the Episcopal Commission on Migrants and Itinerant Peoples. In this capacity, I was often invited to visit several Filipino Communities all over the world, including the Filipinos in the Netherlands. Praying at the Shrine of the Lady of All Nations, each time I passed by Amsterdam, I realized that Mary, under this title, suits well the Filipinos known as and proud to be called PUEBLO AMANTE DE MARIA, expected to be the bearers of the Catholic Christian Faith to all Asia and who are now dispersed in almost all countries in the globe where they are oftentimes silent witnesses to the Good News. I speak a lot about the Blessed Mother to Filipinos within and the Philippines, under her title Our Lady of All Nations or Mediatrix of All Grace, the most prominent Marian title in the Archdiocese of Lipa.

As the CBCP representative to be at the service of Filipino expatriates, I received an request to convene several assemblies Filipino communities across the USA from August till September of 2001. The latter half of September would have found me in the vicinity of New York. It is my habit whenever I would be in the East Coast, to include the Twin Towers in my visits. After the 9/11 disaster, I thought with trepidation that my curiosity could have cost me my life.

I skipped my 2001 commitments in the USA when the Apostolic Nuncio to the Philippines made known to me that I must attend the Tenth Bishops’ Synod in the months of October and November as one of Pope John-Paul II’s chosen delegates. I could not in conscience absent myself from the Military Diocese for four months (August to November). I thought with gratitude to God that, becoming the pope’s unexpected and unmerited choice, Blessed John-Paul II saved me from being a victim of the Twin Tower tragedy. Besides this personal realization, that fateful event, from my point of view, had a bit of twist related to Our Lady of All Nations which is the motive of this brief sharing.

On September 12, 2001, a memorandum was issued from the office of the late Jaime Cardinal Sin (+June, 21, 2005). The document ironically dated September 8, 2001 expressed his reservations about the said Marian phenomenon in Amsterdam and cautioned the faithful about the devotions. I was deeply disturbed by that document so that on September 21, 2001, the day I was to leave for the Bishops Synod, I wrote His Eminence a letter revealing to him among others

[1] that the document dated September 8, the Feast of the Nativity of the Blessed Virgin Mother, was published on September 12, the day of the tragedy in the USA (we in the Philippines are twelve hours ahead of the USA);

[2] that from 1998 until 2000 I took part in the prayer convention in Amsterdam around the Lady of All Nations with several other bishops and even cardinals as well as many international pilgrims;

[3] that I am convinced about the timeliness of the Marian movement and am partly responsible for the spread of the devotion among Filipinos at home and overseas; and

[4] that I would inquire from Rome the real state of the Our Lady of All Nations issue.

I was not aware, while still in Rome, that on October 1, 2001, His Eminence issued a follow-up circular letter (see enclosure 3), modifying the September 8 memorandum. During the break in the Synod, I conferred with the future Pope Benedict XVI, who was once Joseph Cardinal Ratzinger, about Our Lady of All Nations, not concealing from him Cardinal Sin’s September 8 document. In my November 9 letter (see enclosure 4), I conveyed to His Eminence Cardinal Sin my conversation with Cardinal Ratzinger:

‘In our discussion, Cardinal Ratzinger clarified to me that indeed up to this moment the Church does not yet recognize anything supernatural in the so-called revelations in Amsterdam starting allegedly in 1948.[1] However the Vatican agrees with the pronouncements of the late Bishop Boomers and the present bishop of Haarlem-Amsterdam, Mons. Punt. Cardinal Ratzinger sees the title Our Lady of All Nations as a most worthy and meaningful title for the Blessed Mother. She indeed gathers together all nations to her Son. The prayer is likewise worthy of being promoted among and recited by the faithful, Finally the picture is beautiful and contains nothing objectionable. Revering Mary under the above title, before the said picture, reciting the said prayer by no means violates any doctrine of Catholic Faith and morality.’

I am glad to relate to everyone here this conversation I had with Pope Benedict XVI, while he was yet Joseph Cardinal Ratzinger, in 2001. To highlight again and repeat my unforgettable dialog with the present pope in 2001, with the backdrop of that grim disaster that shocked the entire earth, the present pope told me in person

The 2002 letter of Bishop Punt recognizing the supernatural origin of the apparitions and messages of the Lady of All Nations is a very welcome document for us in the Philippines. More than ever the world needs to believe in the maternal concern of the Blessed Mother. Of all places the Virgin Mother chose Amsterdam to tell all nations about the love of God, the hope that Her Son brings.

Exactly three months from now, it will be ten years since the New York tragedy. This great Pentecost Sunday Prayer Assembly around Our Lady of All Nations is a very telling event, an extraordinary moment. The Pentecost event must become real in our times. People of all races, background, cultures united in prayer with the Holy Mother as the Holy Spirit comes. The world has not forgotten 9/11.  The situation since then has not improved. Is it because there are not enough who heed the Blessed Mother’s plea? Alas a lot more still ignore her Son, unmindful of all God does for humanity. It is never futile, in fact it is utterly auspicious, that many others are urged to pray:

Son of the Father,

Send now Your Spirit over all the earth.

Let the Holy Spirit live in the hearts of all nations

That they may be preserved

From degeneration, disaster and war.

Let the Lady of All Nations,

Messages on War and Peace